On Friday night, the Yankees beat the Tigers 5 to 3 in a pretty ordinary game.  AJ Burnett started the game for New York, and was relieved by Phil Hughes at the start of the 7th inning.  Hughes gave up 3 hits in two innings, but struck out the other 6 hitters he faced.

It was just another good appearance out of the pen by Phil Hughes who is looking more and more comfortable in that role.  He has quieted the Joba to the pen cries as well, and has shown a power fastball and harder breaking stuff in the shorter stints. 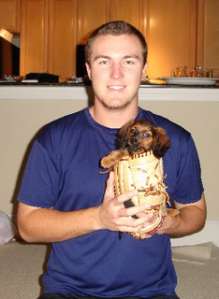 He is a toolbag, but he may be the bullpen savior the Yankees need.

Since going to the pen Phil has pitched 20 1/3 innings, given up just 10 hits, struck out 25 batters, walked only 5, and given up just 2 earned runs.  If you discount his first appearance out of the pen, where he relieved Chien Ming Wang in the 3rd inning of a game against the Red Sox, Hughes hasn’t given up a run.

Hughes could be a huge commodity for the Bombers either in the pennant race or in a deal for ace sinkerballer Roy Halladay.

This entry was posted on Saturday, July 18th, 2009 at 1:41 am and is filed under Carebear, MLB, Women. You can follow any responses to this entry through the RSS 2.0 feed. You can leave a response, or trackback from your own site.