We covered the Jay Cutler saga in depth here at Blue Duck, and a new crybaby has risen in pro sports.  This time its in baseball, and its actually a repeat offender: good ol’ Milton Bradley.

Bradley had a career year last year,(surprisingly he had his career year in a contract year) and signed a big 3-year contract with the Cubbies before the season.  Things have not gone well in the Friendly Confines, though, since the genial Milton got there.

Bradley was suspended for the remainder of the season on Sunday after going after the Cub’s fans for basically the whole season.  Bradley has complained all season about overall “negativity” in Chicago, and said in an interview recently that he needed “a stable, healthy, enjoyable environment,” Bradley told the newspaper. “There’s too many people everywhere in your face with a microphone asking the same questions repeatedly.”

Well Milton, this is what you signed up for.  It comes with the 3 year, $30 million contract.  The big problem for the Cubs is that Milton is not Jay Cutler.  He is not coveted by any other team.  Milton is a 31-yr old, well documented virus who batted .257 with 40 RBIs this year.  The Switch-hitting rightfielder is capable of still being useful offensively, but hes no longer a risk to be an issue, he is a sure thing.

The funny thing is, Bradley actually hit better at Wrigley this year when he quit bitching long enough to swing a bat.  The Cubs are going to be stuck with this contract unless they find some other team willing to get stuck with Milt.

The real question I have is: what the hell happened last year?  Bradley managed to stay content for a full season and actually hit the ball well.  Dude had a .436 OBP last year, and has other years similar to that, but he is on his 8th major league team for a reason.

Unfortunately for Bradley, 8 strikes and you’re out. 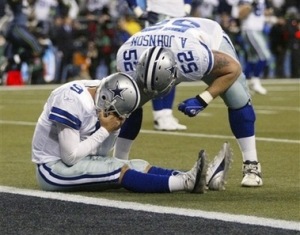 If only Tony had listened to our betting advice, he wouldn't be stuck embarrassing himself as the Cowboys backup QB. Wait...he's a starting QB? That's just sad.

We are two weeks into the NFL season and still a long way from figuring out the contenders and the pretenders.    As a result there are many favorable odds to be found from Vegas though they come with great risk.

Unfortunately the loss of Polamalu hurt the Steelers more than I expected.  That little girl Jay Cutler was able to do just enough to win this game for the Bears and ruin my first lock of the week.

As for the Seattle vs San Fran game.  The 49ers look like a decent team this year, coupled with loss of Hasselbeck, the Seahawks weren’t in this game at all.

The Titans biggest offseason loss was Albert Haynesworth who is now the coach of the New York Jets...and white.

The Titans have shown that they are capable of scoring points this year.  At the same time they’ve given a decent amount up as well.  While Mark “Sanchise”  is going to be a good quarterback,  I expect the Titans have the proper personnel to confuse him enough to steal the win (and avoid being the best 0-3 team).

Taking teams favored by a touchdown or more this season has resulted in a stellar 2-4 result in those games.  Both of those wins have been with teams going against Detroit.  While I hate this pick, I’m going to take conventional betting wisdom and take the heavy underdog.

Not long after I learn my lesson, I immediately turn around and take the team favored by a touchdown.  This is another scary pick as the Giants red zone play calling is just awful to watch and they make blow outs close on a regular basis, but for this week I’ll be cheering on the G-men.  Under 44 is also another strong play, these 2 teams have gone under all 7 times they have met since 1992.

The Texans were able to beat the Titans, even with Chris Johnson steamrolling through them.  I expect much of the same vs MJD and the Jags.  Look for Matt Schaub to have a good day against a secondary that gave up the best completion percentage over a game in NFL history to Kurt “the grocery bagger” Warner.

San Fran is going to have a tough time winning this one. I do however, have faith that they will put up at least 17 with the Vikings and ALL DAY Adrian Peterson covering the rest.  Shaun Hill really is an okay quarterback.

Pats vs Falcons OVER 44

All signs seem to be pointing to the Patriots being an average team this year.  Tom Brady and this offense are just not clicking…yet.  As a Patriots homer it is my duty to not give up hope.  It’s far too soon to just think of Tom Brady as being average.  As a result the +4 line for the Falcons in this game is very inviting, but this has the makings to be a high scoring game.

The Redskins offense is absolutely terrible. Can someone pass the memo to the Redskins that Jason Campbell is not the answer?  I wouldn’t be surprised to see the Lions win this game outright, but I will gladly take the 6.5 point spread.

The Packers have not looked as good as many expected them to be.  They were embarrassed last week at their home field by a team that no one expected to be any good.  This makes for a good statement game against the worst team in the NFL.

Great game last week for the Bengals.  Really controlled the game with Cedric Benson.  Don’t expect the same against the Steelers defense.  Big Ben should have a decent day…and MAYBE they will get their running game going.

Raiders have a lot of potential, but JaMarcus Russell is still the quarterback right?  Yah, I’ll take the underdog Broncos.

Dolphins vs Chargers over 43

Our bro Philip Rivers is thrilled to hit the over this week!

This is tough.  The Dolphins play a lot of ball control, as evidenced this past Monday night, making it difficult to score a lot of points.  They also have a pretty good running game, and a very accurate passer going against a very weak Chargers defense.  Chargers have to outscore opponents to have a chance, and they have the offense to do just that.  This game should hit the over.

Both teams pass to set up the run.  I’m giving the edge to Peyton and the Addai/Donald Brown combo.  Colts have a better defense and a comparable offense as long as Peyton is on the field.

Panthers vs Cowboys OVER 46

Neither defense has really stepped up, though that should change in this game.  Both quarterbacks are turnover prone and it should lead to high scores.

Once again no line for the Eagles as of publishing time.  I Like the eagles -6.  Even with Kolb.  I will update this once a line is available.

Locks of the Week:

Jay Cutler will hold it together just long enough to deliver me a win.

Matt Hasselbeck looks doubtful to play this Sunday, and while Seneca Wallace is a decent backup he is still a backup.  Look for the Bears to win by a touchdown and listen for that obnoxious guy at work on Monday to utter “Da Bears” at least 3 times.

Brees dismantled a pretty good defense last week, he should have no problem doing the same against a very average defense this week.