The old baseball adage, “Good pitching beats good hitting” has proved true since the days of Walter Johnson and Christy Mathewson.  Having even one great pitcher can level a playoff series like no other position on the ballfield.  So we at BlueDuck thought of a great idea.  Since the MLB doesn’t honor the top pitchers in the league each year, we have to take it into our own hands.

So we set out.  After hours of statistical and encyclopedic research, we came up with a name for the award.  Then it took us 3 minutes each to pick our winners.  The First Annual Orel Hershiser “Bulldog” Medal for Pitching Excellence goes to: 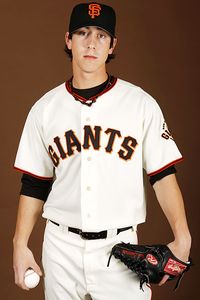 He looks like the kid from Rookie of the Year. Or a kid in a halloween costume, but he throws 95 with a massive hook.

You know until like the mid-1930’s you could only win the MVP award once in your career.  This means that Babe Ruth (who owns like 5 of the 10 best statistical seasons of all time) only has one MVP award.  So people are slow to give guys awards two years in a row if its close, but I think the opposite way.

Lincecum took the Cy Young last year, and had a target on his back all season.  He led a pretty mediocre team on a very strong effort to reach the postseason, and this team will build around Tim in years to come.  His ERA is 2nd in the league, 1st in K’s, and 4th in WHIP.

The only knock on Lincecum is the 14 wins, but he also has 10 no decisions.  In those ND’s, the Giants were 4 and 6, and in those 6 losses, Tim gave up only 11 runs.  That tells you the Giant’s offense is pretty pathetic, and with a little help, Tim could have gotten 18 or 19 wins.  Another little stat, Tim Lincecum’s Giants lost 6 games this season that he went at least 7 innings, and gave up less than 2 ER.  Best pitcher in the NL.

Maybe I’m a closet Cardinals fan, having picked Carpenter as Comeback Player, Franklin for NL Closer, and now Wainwright as Cy Young.  But when looking at the numbers, its not even close.  He has 19 wins, the second lowest ERA in the league (2.58), led the NL in innings pitched, and 200+ strikeouts.

Pitching for a team that didn’t know what they had for a pitching staff, Wainwright has served as the anchor.  He locked the award up while clinching the division for the Cards on Saturday, going 8 strong, striking out 11 in a 130 pitch effort.  His team needed the win, and he powered them through.  He has won a World Series as a closer, is this the year he wins it as an Ace?

If Greinke and Lincecum both win the Cy Young, it will mark the first time two pitchers have won the award before their 15th birthdays.

The field of candidates in the AL is deep, with Halladay, Verlander, Sabathia, and King Felix.  But the pick should go to the best pitcher, not the pitcher with the most wins.  Last year’s award to Lincecum finally illustrated that we shouldn’t penalize a player for pitching on a miserable team.  Sabathia led the league in wins, but he limped out of the gate while sporting a respectable 3.21 ERA.

But Greinke has been flat out filthy all year long.  He has only 16 wins, but pitches for Kansas City where wins are sparse.  An ERA of 2.06 over an entire season is simply disgusting, accompanied by 237 strikeouts.  He’s even better when considering he allowed only 60 runs all year (23 less than Halladay, the next closest pitcher).  And let’s face it, a pitcher’s job is to prevent the other team from scoring.  They can’t help it if their team cannot score runs to back them up.

Grienke did his job, giving his team a shot to win each time he toed the rubber.  Imagine if he pitched for a playoff team?

King's been laughing at AL Hitters all season.

King Felix had a huge year, the kind of year we have been expecting from him since he came up, and the kind of year you can expect him to recreate the rest of his career.  Electric is the only way to describe the stuff that Hernandez hurls up at hitters.  King finished 4th in the league in K’s, 2nd in ERA, and 2nd in wins.

Felix did this all with the Mariners, though.  The 23year old had 4 games where he gave up 2 or less runs and went 7 innings, and the M’s found a way to lose.  His control gets away from him at times, and his 70 walks led to his 1.15 WHIP, but the ERA shows that those runners do not score.

Hitters batted only .237 off of Hernandez, third in the AL, but they slugged only .321 off of the young righty(1st), so he never gets hit hard.  Only Greinke gave up fewer HR’s in the AL, but King gave up 16 less doubles than Greinke did in 11 more innings.

I call it a wash between the 2 guys.  They had the best years, but Roy Halladay is still the best pitcher in the AL.  Orel would be proud of all of them.

Tomorrow’s the last day of the BlueDuck MLB Awards Ceremonies.  It will conclude with the MVP Award.

Comeback Player was on tuesday, and Best Closer was on wednesday.  We don’t care about rookies.

This entry was posted on Thursday, October 1st, 2009 at 5:25 pm and is filed under Carebear, MLB. You can follow any responses to this entry through the RSS 2.0 feed. You can leave a response, or trackback from your own site.