The Ghosts have Crossed the Street

On Friday night, the Yankees came back from two runs down in the ninth, and then overcame a bases loaded, nobody out jam in the eleventh en route to a Mark Teixiera homer, and a 2-0 lead in the series against the Twins.  The victory makes one wonder if the mystique of old Yankee Stadium has jumped the short distance into the Bronx Bomber’s new stomping grounds.

The Yankees caught a few big breaks in this one.  Terrible umpiring was prevalent from the first pitch, but in the eleventh, Joe Mauer hit what appeared to be a leadoff ground rule double.  The umpire called the ball foul, though replays proved it to be fair by at least a foot (Words cannot describe how bad this call was.  The umpire was standing on top of it, and staring right at it.  Melky Cabrera touched it in fair territory.  Bad call).  Mauer would later single, but was forced out at the plate in an epic escape by Yankee’s reliever David Robertson.

Earlier on in the game, with the game still tied at zip, Matt Tolbert singled with two outs and Delmon Young at second.  Carlos Gomez took a wide turn rounding second, and Nick Swisher quickly got the ball into Derek Jeter.  Jeter who is seemingly, always in the right place at the right time in the month of October, applied the tag to Gomez just before Delmon Young reached homeplate.  Inning over, game still tied.

A more blatant example of pimping a homerun. At Least Manny's went out.

Also, a moment no one touched on during the coverage.  Brendan Harris hit a key rbi triple for the Twins.  While watching, the first thing I thought when Johnny Damon whiffed on it was, “that will be an inside the park homer,” but replays show Harris pimping it (definition: verb. admiring a batted ball that you think will reach the stands.) and getting off to a slow start.  He had a stand up triple and slowed down into third.  If he busts it out of the box, Harris may have had a rare homerun without leaving the yard.

A third break for the Yankees is that in his last two outings, Joe Nathan has looked pathetic.  Tuesday, against the Tigers, he pulled a Houdini on a ball smoked at Orlando Cabrera that caught Curtis Granderson napping at first, and tonight, he came in and could not throw a strike.  Nathan looked shook on the mound.  He was sweating like a pig.  When Nathan did find the zone, he found a bit too much of it, and paid the price.  Teixiera got a hard single off of Joe, and Alex Rodriguez followed with an absolute blast that made New York fans forget about the past, until tomorrow.

Jose Mijares dodged a bullet in the tenth, a runner inherited from Joe Nathan, Brett Gardner took off from third on a line drive to Orlando Cabrera and was doubled off to end a very promising threat.  (In Gardner’s defense, if he froze and got back to third, Derek Jeter was halfway to second base, and would have been thrown out anyways.) 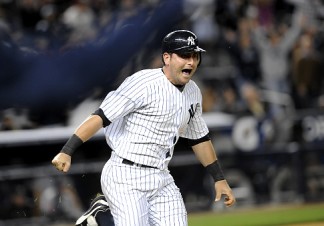 This whole situation led to the very surprising use of Francsico Cervelli in the game.  When Posada was pulled for a pinch runner Francisco was actually at the bar in centerfield with his spikes on.  Cervelli came in and handled David Robertson effectively to get out of a huge jam.

After the first two games of the series the Steinbrenner Plan is working to perfection.  C.C. got a win, AJ Burnett pitched wildly effective, and Mark Teixiera collected the walkoff “wallscraper.”  Yankees fans are just hoping the Plan works in the House that Kirby Built.

This entry was posted on Saturday, October 10th, 2009 at 4:06 am and is filed under Carebear, MLB. You can follow any responses to this entry through the RSS 2.0 feed. You can leave a response, or trackback from your own site.