I wrote most of this about a month ago.  All the picks were done before the playoffs.  Without further bullshit: 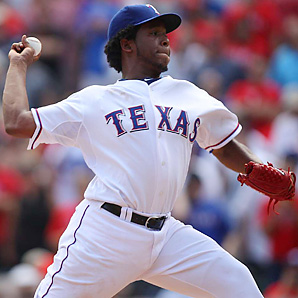 The only real no brainer of the postseason awards.  Feliz breaking the rookie saves record isn’t what impresses me.  Feliz throws hard, but more importantly has balls.  He has filthy stuff, but his out pitch is predominantly his fastball, and a closer who doesn’t have to rely on a secondary pitch, is deadly.  Here’s hoping he doesn’t turn into a Father-in-law beating slop thrower like the guy his career most notably mirrors right now.

NL Rookie of the Year-
Buster Posey
Jason Heyward will win this award.  I don’t know if Posey is even eligible, but Posey has meant more to his team than maybe any rookie in recent years.  The only stat Heyward has him on is OBP.  Posey plays in a bigger yard, at a more important position, on a team with less weapons.  Posey was the best catcher in the National League this season.

Another pick that I doubt gets the award.  I picked Miggy last year as my MVP, and he sobered up and had another solid season.  All of his numbers got better this year, but the Tigers faded and this is what will ultimately kill Cabrera’s chances.  What worries me is this guy is arguably the best overall hitter in baseball (yeah, I said it, better than Pujols.) and he may never win an MVP.

Last year, I showed a comparison of striking similarity between Cabrera statistics up to age 26, and Ken Griffey’s to the same age.  He stayed on that Griffey pace.  The reason Cabrera is the MVP, though, is the lack of help in his lineup.  Hamilton had Nelson Cruz, Vladi, Michael Young, and Ian Kinsler at different times of the year.  Cano had the Yankees.  Cabrera’s lineup is among the deepest if all healthy, but Carlos Guillen played less than 70 games, and Magglio Ordonez played right around half the year.  No one else had more than 15 hr’s for the Tigers.

The Rangers win a closer West without Hamilton, the Yankees finish third without Cano, Tigers finish 20 games below .500 without Miggy.  He had the biggest impact on his team.  He should be the MVP.

NL MVP-
Carlos Gonzalez.
This is a tough call.  The late surge by Troy Tulowitkzi and the late fade of the Rockies hurt him at the end, but his numbers are staggering.  CarGo (terrible nickname) finished first in the league in hits, total bases, and batting average, 2nd in RBI’s and slugging, and 3rd in OPS.  All this while swiping 26 bags, and playing well at all 3 outfield positions in a rather expansive Coors Field outfield.

Pujols and Votto sort of cancel eachother out, but I think Votto will get the award.

It should be a Venezuelan clean sweep for MVP.

AL Cy Young-
Felix Hernandez
CC is the pick right now, but King Felix has all the numbers.  Well, all the numbers except a clear lack of wins.  The debate will always rage on over whether MVP and Cy Young award winners can come from bottom of the barrel teams.  It tends to factor in more for offensive players than pitchers, but Felix will get knocked for this.  Anyone who picks someone else for this reason alone didn’t look at the stats.

NL Cy Young-
Roy Halladay.
Just better than everyone else.  Pitching names come and go and Halladay puts up the same stats every year.  Why is he the Cy Young, though?  Well, the Phillies were falling apart midseason.  The shit was hitting the fan, and their one steady performer took the hill every 5 days.  The pickup and performance of Roy Oswalt at the deadline ended the NL East race, but Halladay kept his team in position for much of the year.

Too bad Carlos Zambrano didn’t have a good year.  Would have been a banner year for the land of Hugo Chavez.

Closer of the Year-
AL- Mariano Rivera- still got unbelievable numbers, still only has one pitch.
NL- Carlos Marmol- not the best, but unbelievable year for K’s.  16K’s per 9 innings.

Comeback player of the Year-
AL- I don’t care.
NL- Don’t care either.

Manager of the Year-
AL- Ron Gardenhire- The Twins have no pitching, and a thrown together lineup.  Ron did a lot with this squad.
NL- Bobby Cox- Give the old guy a good send off.

This entry was posted on Friday, November 12th, 2010 at 1:19 am and is filed under Carebear, MLB. You can follow any responses to this entry through the RSS 2.0 feed. You can leave a response, or trackback from your own site.