BlueDuck was in full effect on Sunday.  We went out in force to Foxborough, Mass to provide our readers with the most in depth, truthful, and semi-legitimate coverage available on the web.

Sure, we had media credentials and a photographer on the field, but did that stop us from tailgating, and somehow avoiding paying the recession-friendly $40 parking fee at Gillette stadium? Hell no.

We are above all, fans.  It was almost uncomfortable, as well as slightly obstructed (somehow AC/DC trumps AC Milan) sitting in the stadium press box.  It was hard to get a feel for a game that didn’t have much of a feel anyways.  So we checked out at halftime, and joined our colleagues in our rightful position, the third bowl.

Once out of the nicely air conditioned luxurious box we rejoined the sweaty, mostly drunken fanbase we had connected with earlier in the parking lot, and watched the last forty five.

The game itself was a disappointment.  The fans weren’t separated, the players not into it, and it had the feel not of a game between rivals, but of a spring training game between say the Royals and the Diamondbacks.  Most of the support around the pitch was for AC Milan, but no one seemed devastated by the 2-0 Inter victory.

Diego Milito, after beating Enyewu like a rented mule.

The World Football Challenge was an awesome series of games, and obviously they were preseason tuneups.  So, it should not be expected that these guys go all out.  It was a chance for the American audience to see what good futbol looks like.  Something they rarely see from US teams, and even the US national team.

In the near future, BlueDuck will fly overseas to cover the club soccer teams, but until then, it will be impossible to get the real emotion brought out by the local supporters of these squads.  In the near future, though, so… keep BlueDucking.

Until then, friendly friendlies will have to do.

Thanks Gillette Stadium for treating us like the semi-legitimate media organization we are.

This Year’s Rays: The Royals 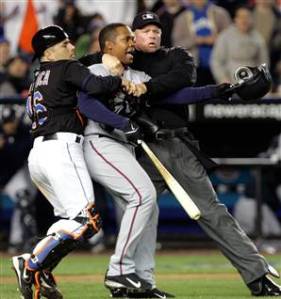 Can Jose Guillen,center, be this year's Carlos Pena?

The Tampa Bay Rays were the biggest surprise in years last season.  Being picked by many as the worst team in the best division in baseball and winning the league, then the pennant, and looking like seasoned veterans through all of it.  It is hard to imagine another team doing that so soon, but if there is one out there it is the Kansas City Royals.

You need kind of a perfect storm situation for this type of thing to happen.  Last year, the East was strong, but weakened at times by various injuries.  The Yankees and the Red Sox were never really at full strength.  The Rays actually also had injuries, but had the type of team that thrived off that kind of adversity.  My formula for pulling a Tampa Bay: good leadership, solid pitching, good bullpen, tough offense, and a somewhat weakened division.

Trey Hillman is the closest thing in the league to Joe Maddon.  Hillman is experienced dealing with young players, and even a language barrier couldn’t keep him from winning (won the Japanese title with Nippon Ham Fighters a few years back.).  The pitching staff is better than most think.  If Zack Greinke isn’t depressed he is a top flight starter, if Gil Meche is healthy he is an overpaid top flight starter, and they added Sidney Ponson who, when sober can give you innings.

The Bullpen is led by Joakim Soria.  Soria had 44 saves and a 1.60 era last season becoming one of the elite closers in the league.  He has Kyle Farnsworth and his extremely hittable high-90’s fastball setting him up.  The rest of the bullpen is made up of guys who have proven effectiveness in the past.  Ron Mahay, Juan Cruz, and Robinson Tejeda round out the pen.

The offense is extremely talented and ready to break out.  With the additions of Mike Jacobs and Coco Crisp, the Royals add power and speed to a lineup that was not deep in either last year.  The power game should expand this year with Alex Gordon showing life in the spring and Billy Butler ready to realize his potential.  Jose Guillen has long been a threat to both baseballs and anyone near him after a strikeout, but he may be the Carlos Pena- like leader of this young squad.  Mark Teahen, Miguel Olivo, and David Dejesus  could make this a dangerous lineup if they get hot.  This lineup also makes for a decent defensive team.  The outfield is quick, and Miguel Olivo is a proven backstop.    There are a few qustions in the infield, but they should take away more outs than they give away.

Finally, the AL central is there for the taking this year.  There is not a complete team in the division.  There is no team with a great starting rotation, and many of the new acquisitions to the league (Carl Pavano, Kerry Wood, Joe Crede) are big risk guys.  The league was close last year with the Tigers taking last place being down by only 14 1/2 games.  The Central was the closest division top to bottom in baseball.  The truth is, any team has a shot in this league.  It is just a matter of a team staying healthy and getting in a groove.  The Royals have as good a shot as any to do this.

If the pitchers provide enough innings to keep the pen fresh, we may be seeing Kansas City fighting down the stretch.  So throw a hundred bucks on the Royals to win the pennant, and thank me in October.